With Graham Parker's 2 week show at Oriel Bach finishing this Saturday I thought it would be good time to mention the artist collective Graham is a member of. The group is called the The 15 Hundred Lives Artist Collective and comprises Graham Parker, Rose Davies and Sylvie Evans.

Rose is a Swansea based printmaker. A great insight into her work can be found on her blog.

Sylvie is a Swansea based artist who specialises in collage.

The aim of the collective is to "show contemporary and accessible visual art in Swansea" and to generate new opportunities for visual artists both locally and further afield. An example of this is shown in the video below. Rose took part in a print workshop in the U.S. and after returning to Swansea used her new knowledge and contacts to put together a collaborative portfolio. Local artists worked in Swansea Print Workshop and created a series of prints which was in turn exhibited both in America and then back in Wales.


If you are interested in the work of the collective or any of its member artists and would like to get in touch please contact the 15 Hundred Lives Artist collective here.
Posted by the little gallery at 14:14 No comments: Graham Parker, Swansea's own seascape artist, launches an exhibition of new work at Oriel Bach, the little gallery in Mumbles, this week.

"I've named the show 'The Sea my Dangerous Love' after a beautiful poem by Melanie Kinge, who imbues her poems with the same spirit of Swansea Bay’s constantly changing shoreline that I aim for in my paintings." Explains Graham.

"I'm delighted to be showing my work again at Oriel Bach. It's one of my favorite galleries. Visitors can always look forward to a variety of styles and media, with regular and intriguing exhibitions of both traditional and more cutting edge contemporary artworks"

"I price my work reasonably, so that it can be enjoyed by many people in their own homes. Nothing makes me happier than when someone likes my work enough to make it a part of their life. That's always a real honour for me." Says Graham.

Gallery manager Elaine Wright says: "It's a pleasure to welcome Graham back to Oriel Bach. His previous show here was very successful and I'm expecting that even more people will want to acquire one of his beautiful paintings. We've been fortunate to exhibit a number of excellent artists and photographers this year. Graham is an artists who is able to capture the spirit of the sea during a raging storm or on a beautiful tranquil sunny day. His work takes you to a place where you can feel the sea-spray on your face."

WHAT: ‘The Sea my Dangerous Love’.

WHERE: Oriel Bach, the Little Gallery in Mumbles,

WHEN: The Gallery is open from Tuesday 9 June to Saturday 20 June, Monday to Saturday, between 11am — 4:00pm.
Posted by the little gallery at 13:37 No comments:

We are proud to be hosting Terry W Scales most recent exhibition here at Oriel Bach. Terry has had an illustrious career as an artist spanning from 1966 as a student of Fine Art Sculpture at Hornsey College of Art to the present day here in Mumbles. 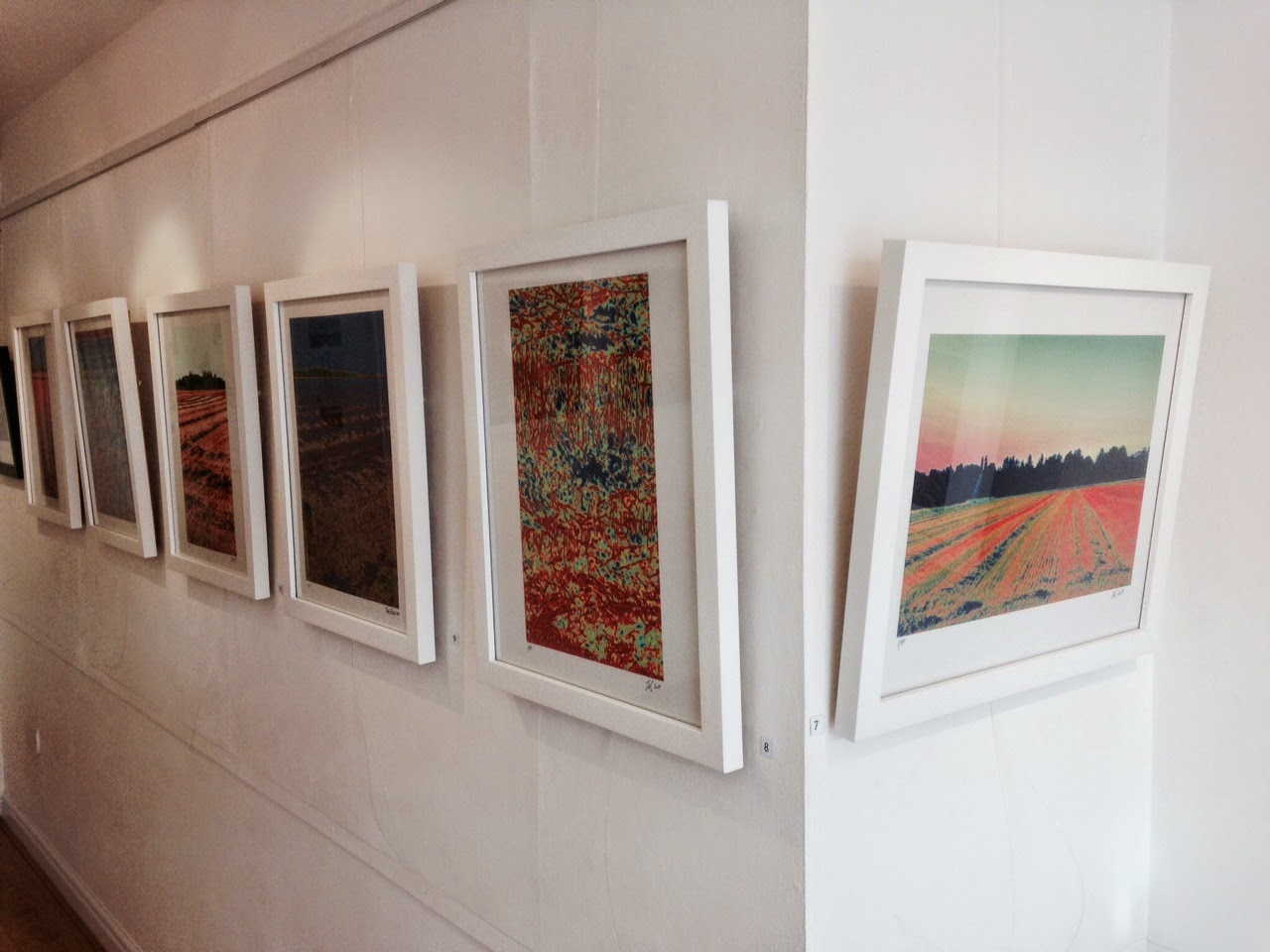 Terry's subject matter is broadly colour, light and reflection but his medium has been diverse to say the least and the work exhibited here though smaller in scale than some of his previous work retains the dramatic quality of his larger pieces.

Looking through the catalogue here in the gallery it would seem strange that Terry's work would translate to a smaller space like Oriel Bach. Terry's work has been displayed in public spaces, The Whitechapel Gallery, The Geffrye Museum and at various major art festivals throughout the UK. Terry formed the Touring Theatre of Pneumatic Art in the late 70's which created and toured architectural scale, vinyl inflatable environments which could be both explored by the viewer and used as performance spaces.
Brightly coloured and labrynthine the structures were made to be explored and enjoyed as well as being portable sculptures. Seemingly far from the current work displayed here at Oriel Bach but the same recurring themes of colour and light can be seen in all of Terry's work.
Terry's exhibition is on at Oriel Bach until the 9th of May. There will be a private view held on Friday 1st May from 7 till 9pm at the gallery so come along and meet the artist. 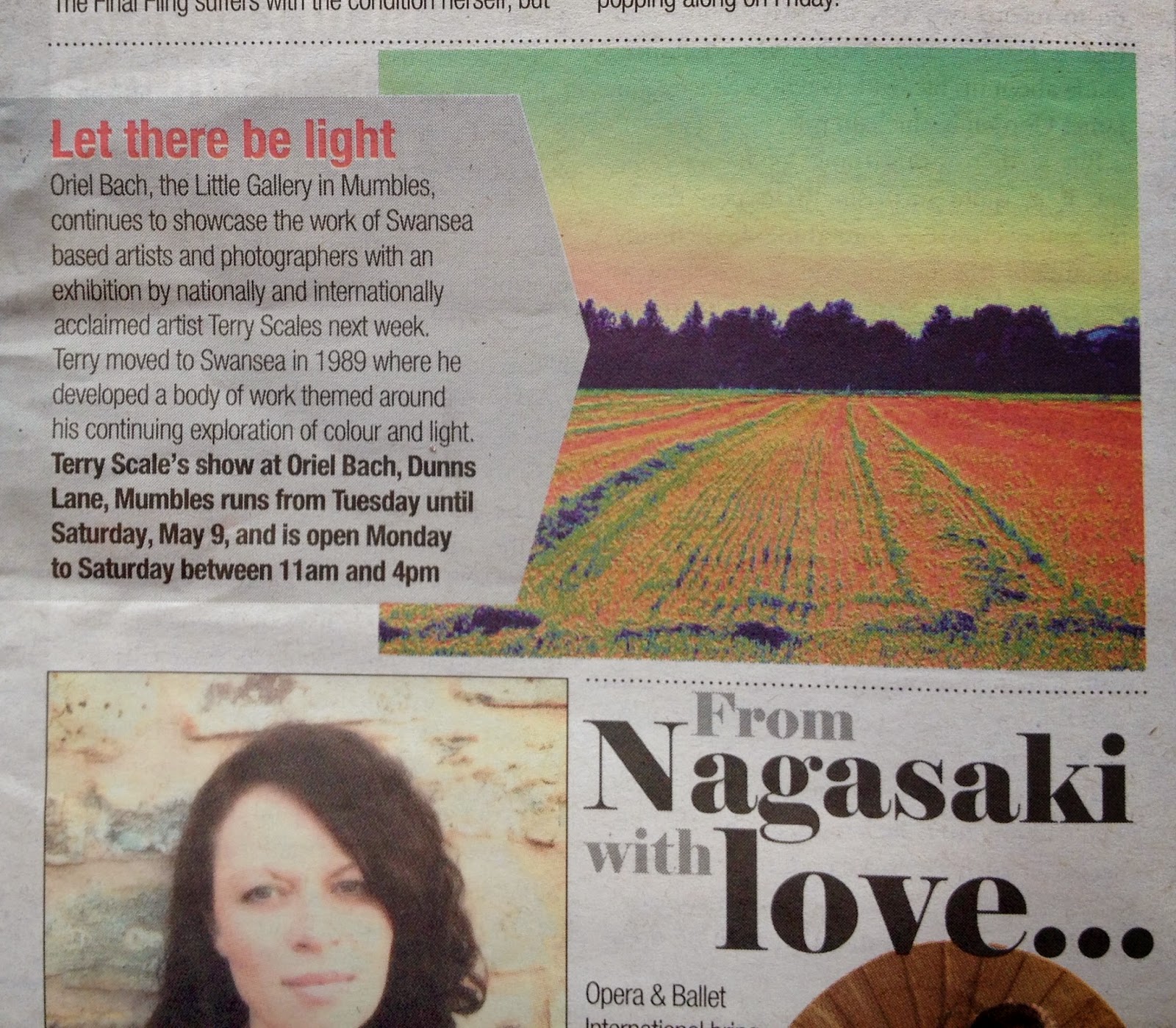 And in other news.........the new sign on the wall outside the gallery is currently being painted. 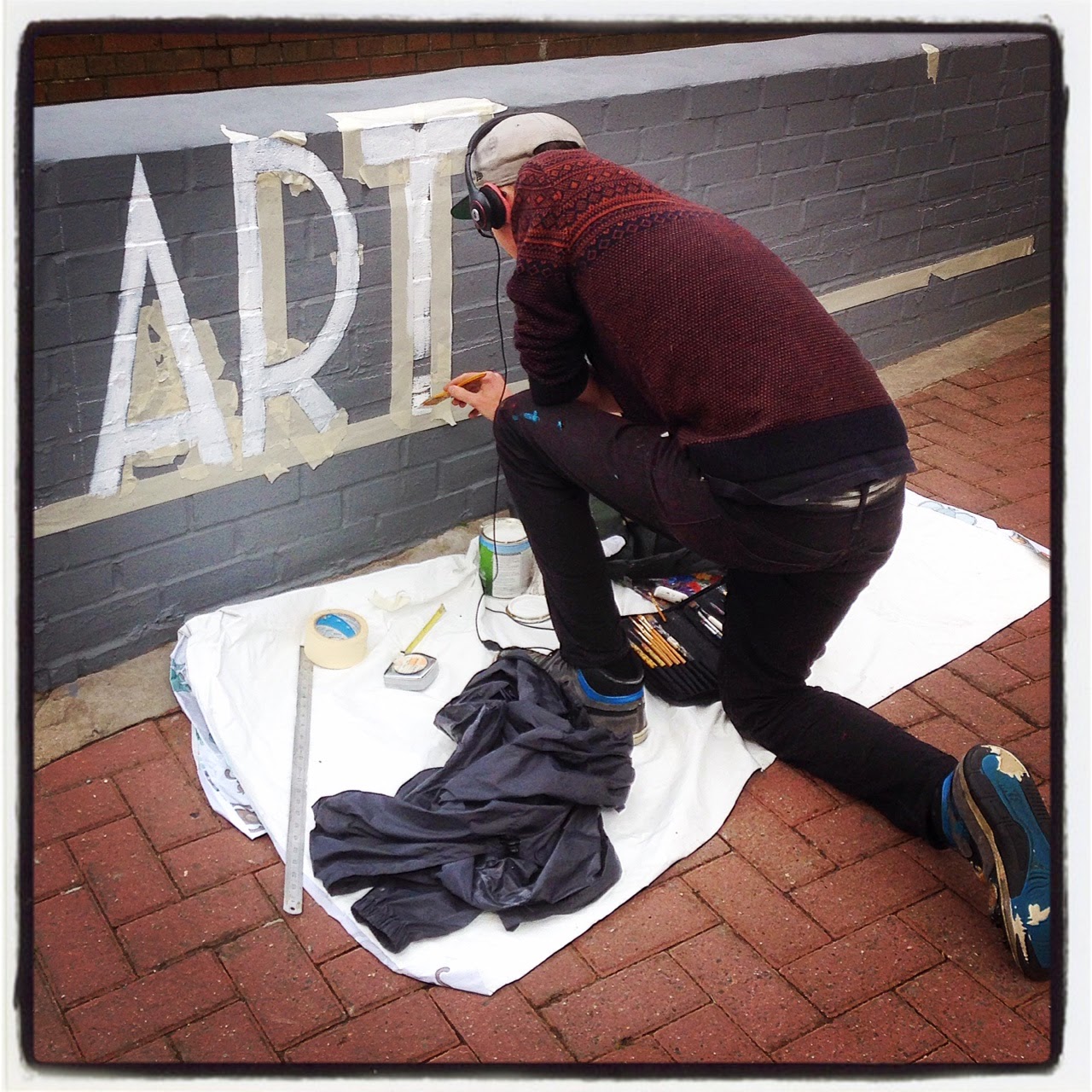 Posted by the little gallery at 12:58 No comments:

Getting out and visiting a gallery is always a rewarding experience wether it is the small local artisan space or one of the majors.
The timing of this trip to London was perfect as Friday was the date for the April Late at Tate event. Late at Tate Britain

"Late at Tate: April is the first of the Speculate series and explores the theme ‘question’. Challenge the way you engage with the gallery space through artist installations, performance, discussion and digital. Responding to Tate Britain and the Tate collection, a mixture of artists, musicians, digital makers and performers will encourage you to explore and question what the gallery space means to you."

It was great to be wandering the galleries after hours and there was a buzz about the place you don't get on a Sunday afternoon. Much of the gallery was in darkness and the main hall was predominantly lit by the brightly coloured digital work of Memo Akten. Body Paint was an interactive digital painting that encouraged viewers to throw digital paint at the gallery wall through their own movements. 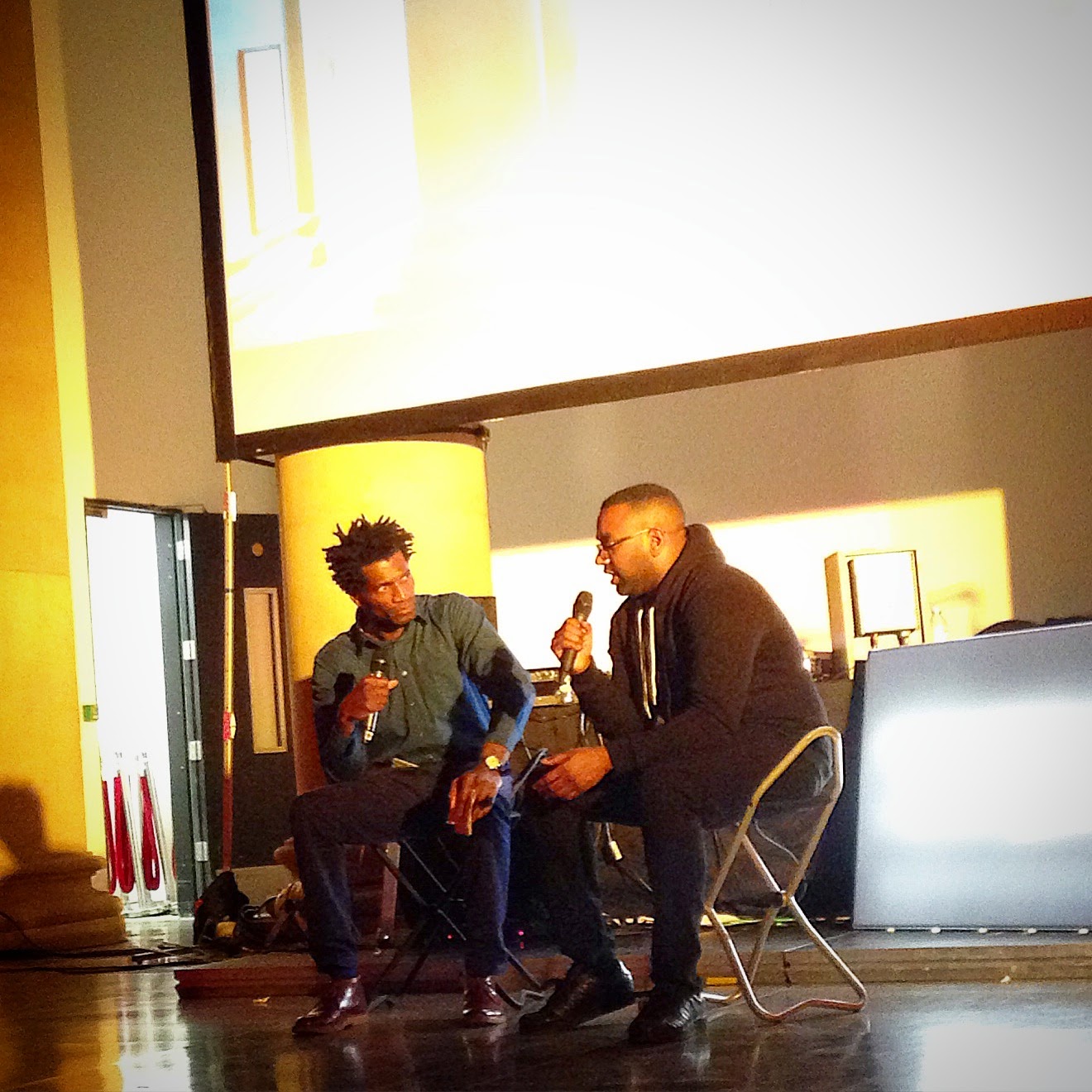 The main event at the end of the hall was the premiere of
'When I see you, I see me' which is a short video piece featuring
the recording artist Wretch 32 engaging with the gallery space
set to a monologue he has written dealing with the meaning of modern day super stars. The screening was followed by an interview with the director of the film.
Events like this give access to art pieces which you wouldn't normally encounter in a gallery and are therefore important for galleries to host and the public to attend. Being open to new experiences in art can often inform your own practice and also helps when viewing the work of other artists. 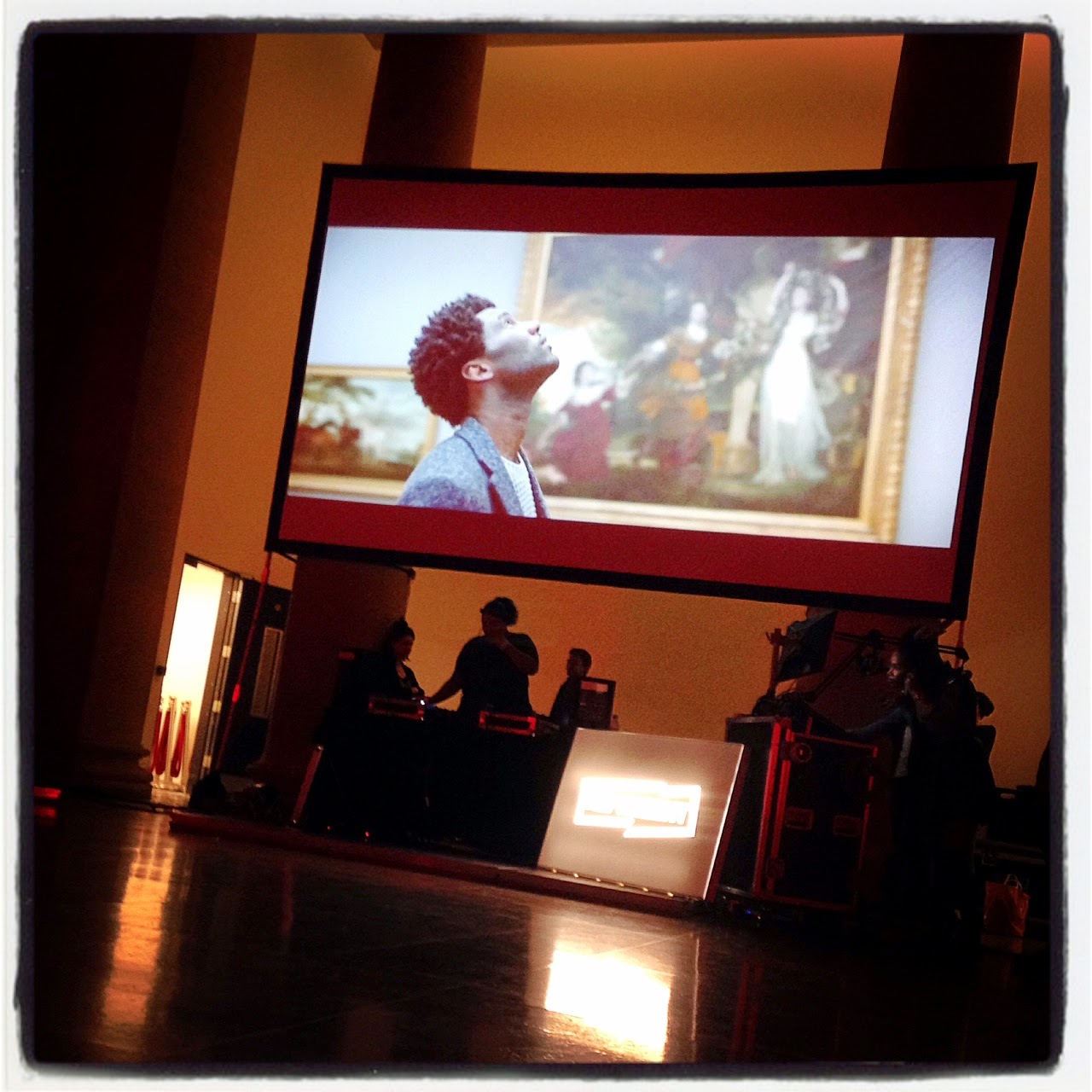 The Late at Tate series is a regular
fixture at all of their sites and it is free! If you find yourself in London and near Tate when this is happening again I can't recommend it enough.
Future events are listed here

The next gallery I visited was The Royal Academy for the Richard Diebenkorn exhibition. After my experience at Tate Britain this was a much more traditional art gallery approach; paintings on walls, mainly silent contemplation and gallery staff watching for un-gallery like behaviour. The perfect setting to examine and appreciate the paintings of Richard Diebenkorn. The Royal Academy website gives a short introduction with these videos. 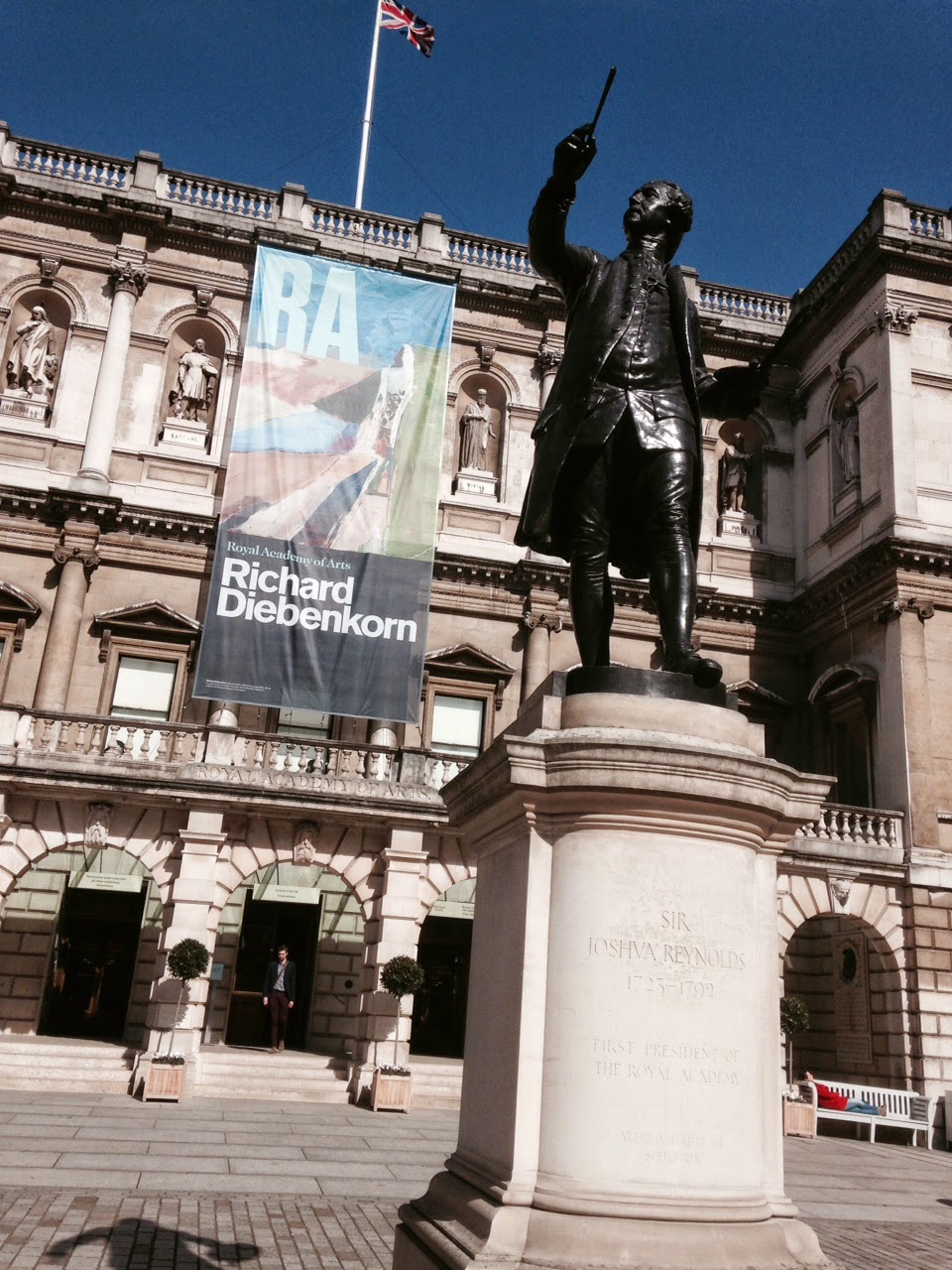 Posted by the little gallery at 14:47 No comments:

Celia studied at the West of England College of Art in Bristol and went on to teach art and ceramics in Bristol, Porthcawl, Cardiff and Swansea where she now lives. The exhibition brings together work from the 1950's to the present day. Celia has worked in a wide range of media including drawing, painting and various printmaking techniques to produce a very comprehensive and vibrant body of work. The exhibition can be viewed at Oriel Bach until the 11th April and the gallery is holding a private view on Saturday 4th April between 2 and 4pm. Come along and view the work, meet the artist and perhaps buy a piece to take home. Celia is also a volunteer at the gallery and can be contacted through the gallery's email address 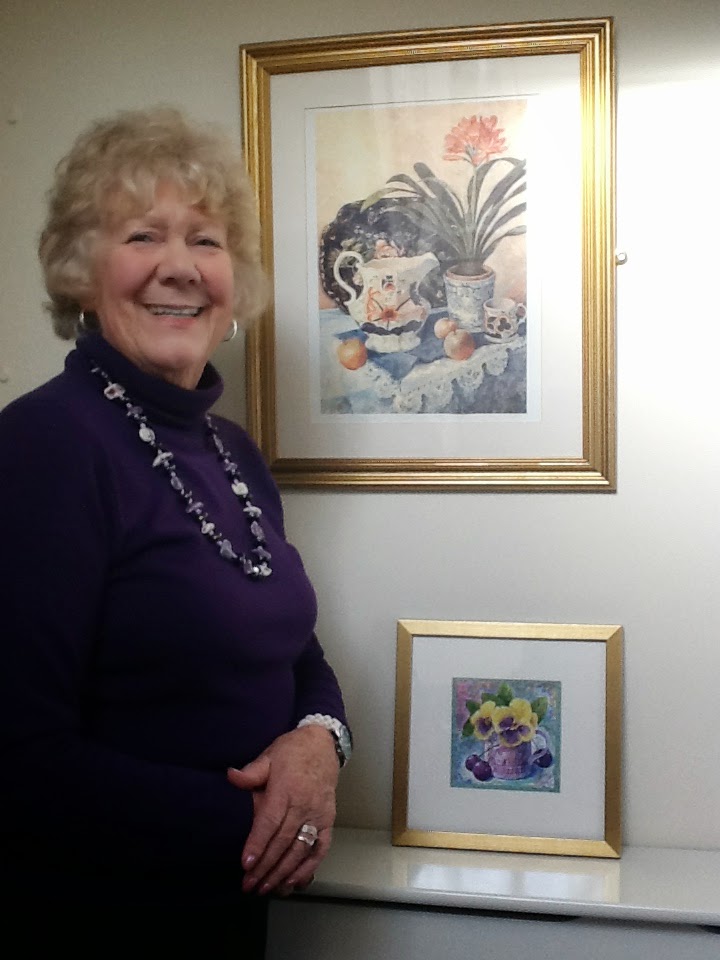 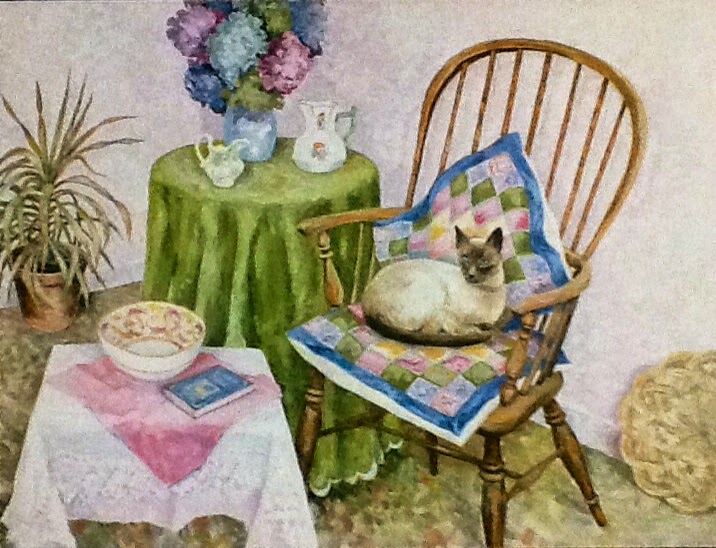 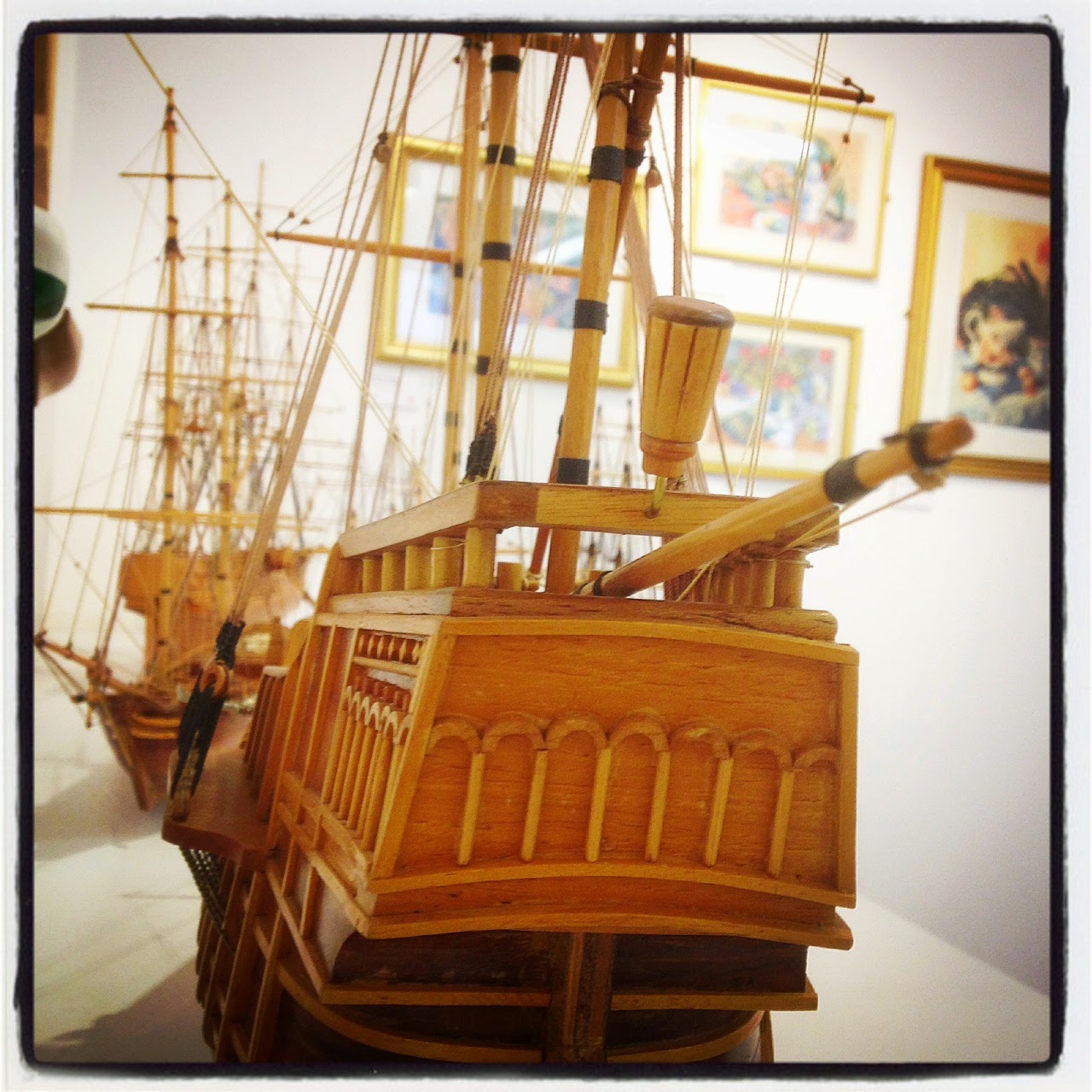 The show also includes a selection of handcrafted ship models made by Alex Brazier. 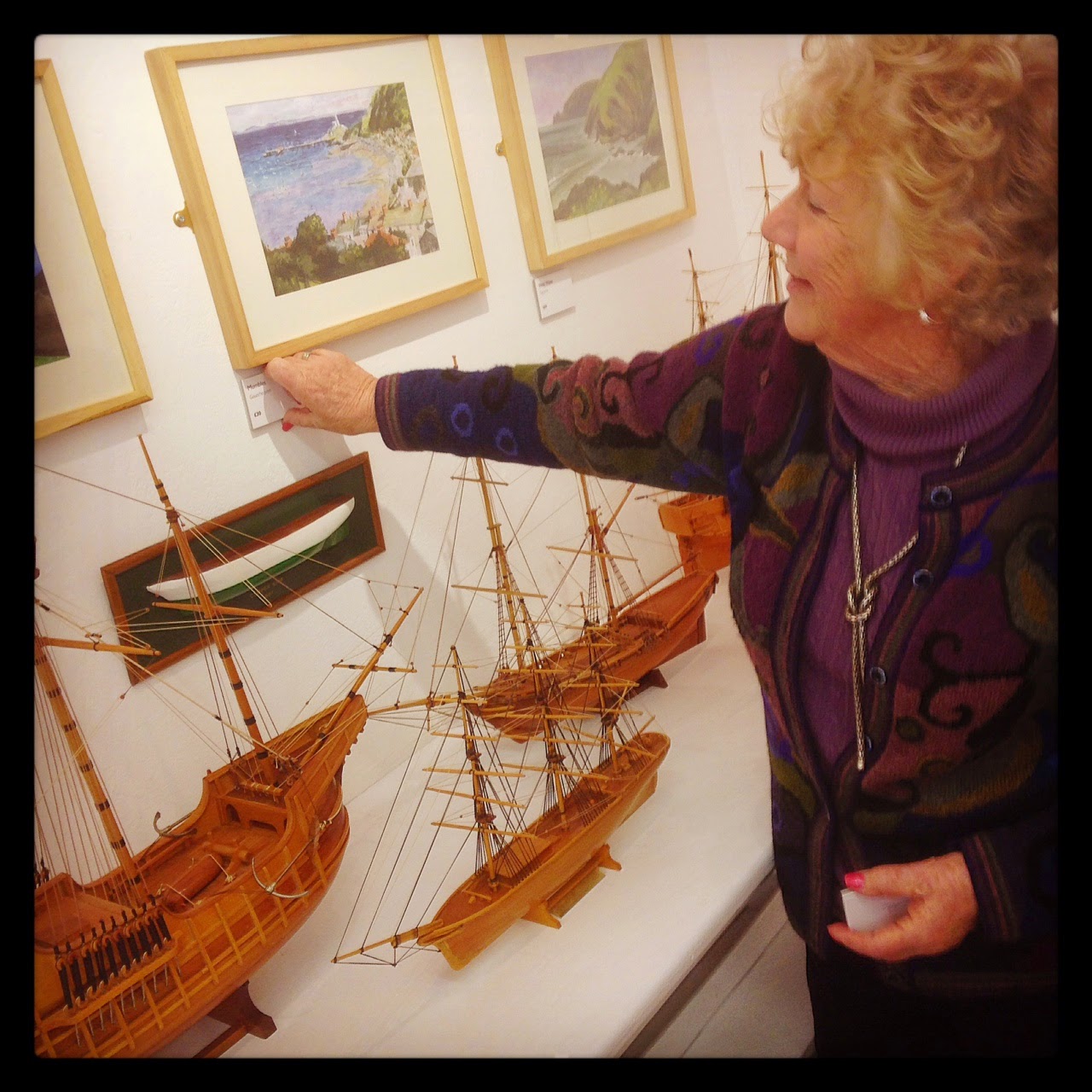 See you at the private view this Saturday between 2 and 4pm!
Posted by the little gallery at 12:38 No comments:

Oriel Bach has an  Instagram account......click the link and follow the gallery for regular images and updates in a familiar square and colourful format. 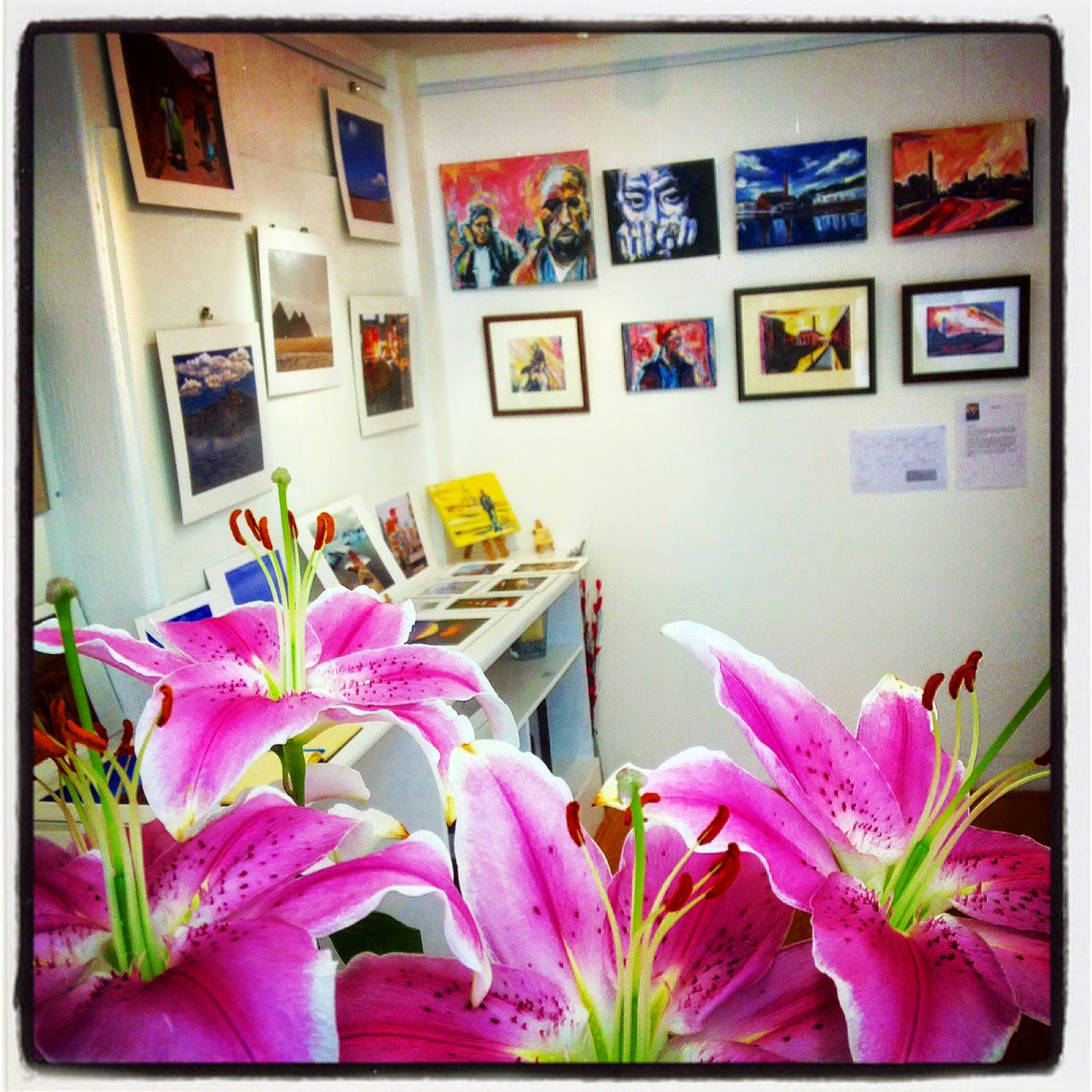 Posted by the little gallery at 12:13 No comments: 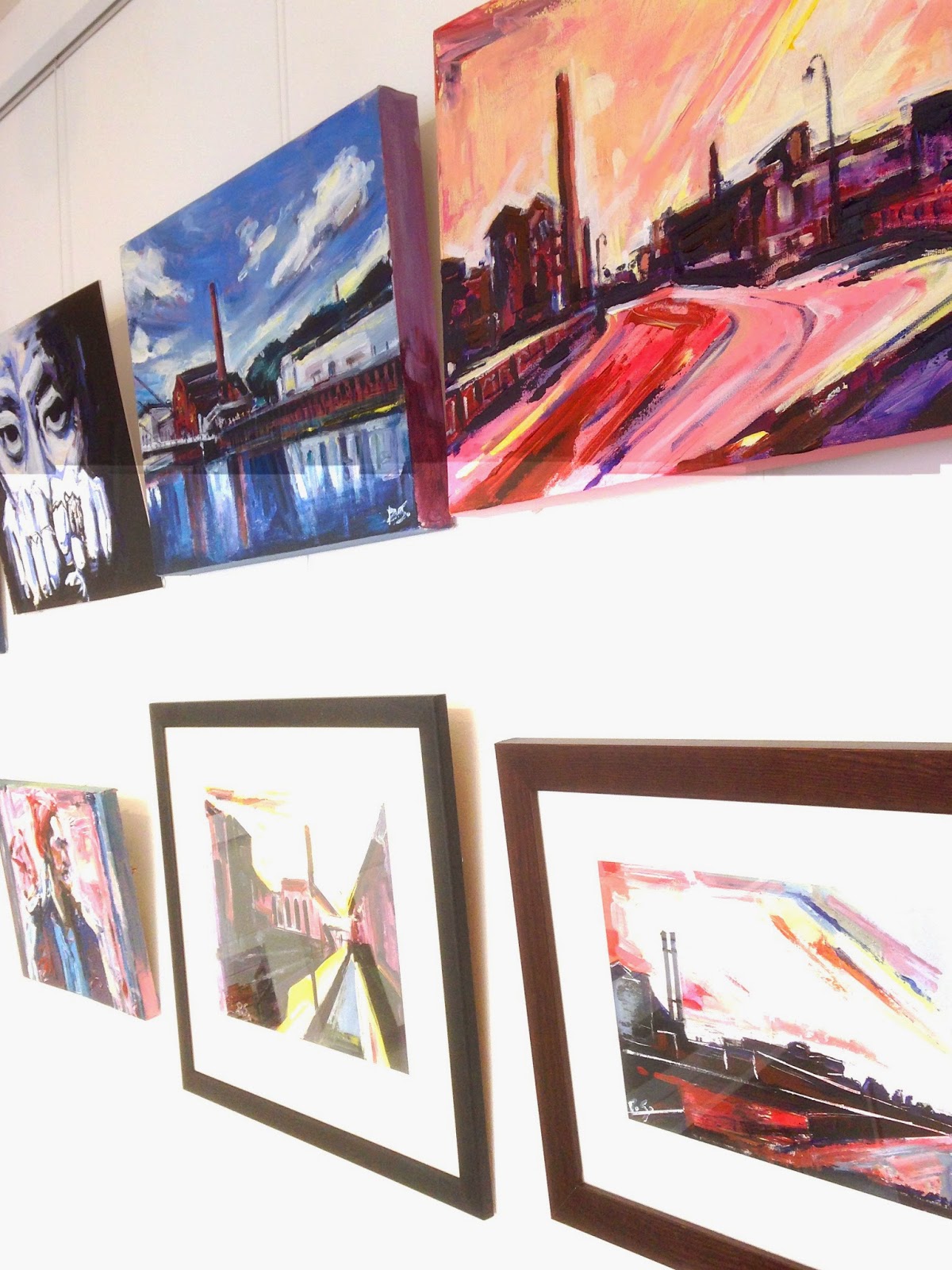 
Ed Morris is a local photographer who's work is a very distinctive approach to the Swansea landscape. His framing, use of colour and reflection have an abstract quality yet the images are very recognisable landscapes from the Swansea valley, through Swansea and into the Gower peninsula. 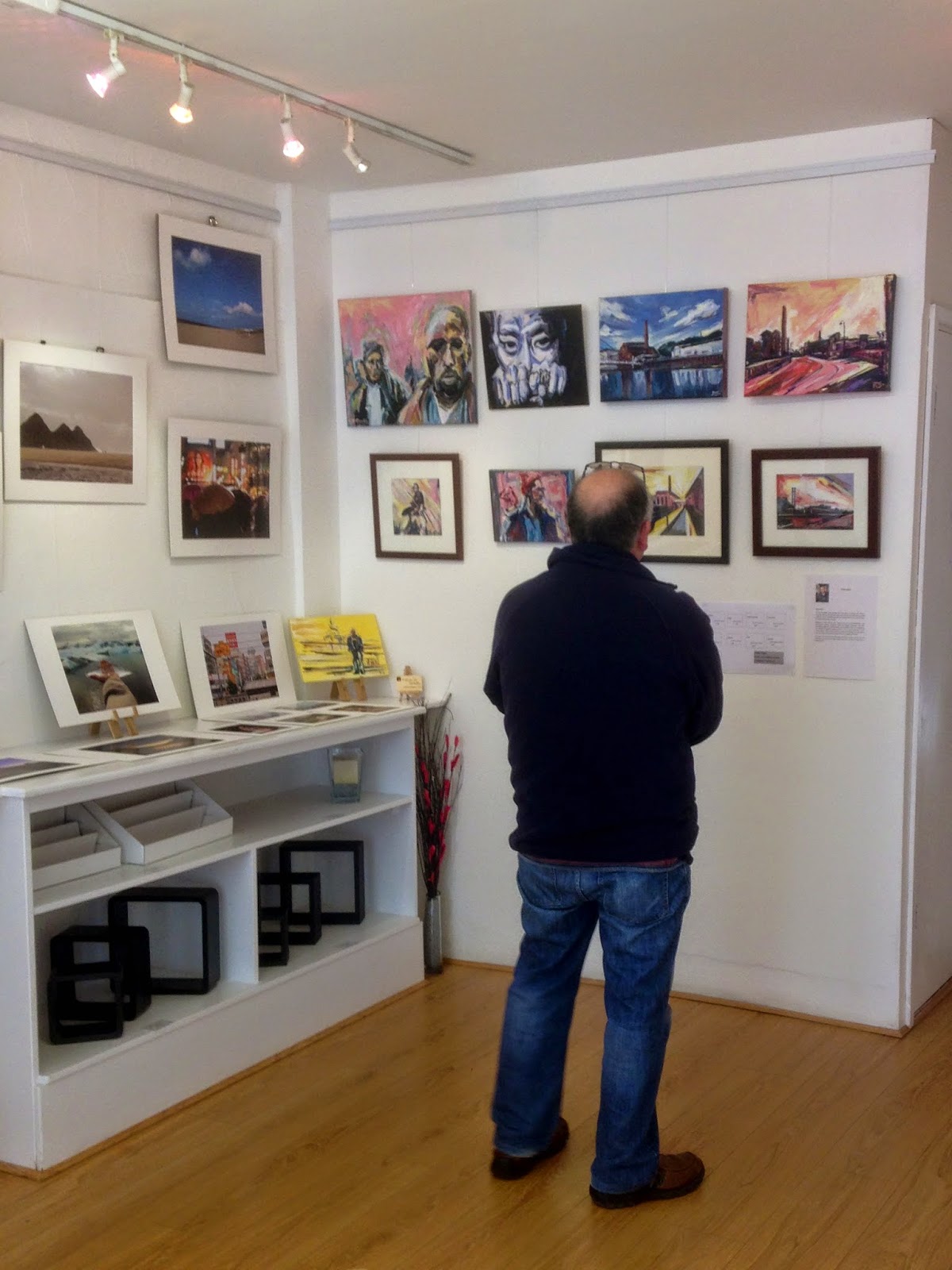 
P.Shanks is displaying some of his more recent paintings. Paddy is a painter based in Swansea and this show comprises both portrait and landscape.

Delia Puzzovio is a Swansea based photographer who is displaying some very bold and impressive landscapes. 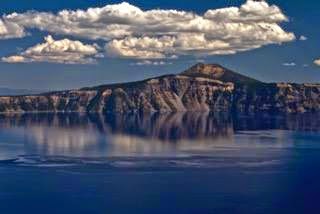 Posted by the little gallery at 22:41 No comments: